The Home Office is currently using a range of accommodation to house newly arrived asylum seekers.  Since September 2020, that has included using former army barracks.  Along with many other organisations, Restore believes that former army barracks are not suitable accommodation for people who have been persecuted and are living with past trauma.  We also believe that the conditions in the former army barracks are not acceptable, especially in a pandemic.  They are not Covid secure and there has been an outbreak of Covid in one of the camps with nearly 200 people contracting the virus.  A recent independent inspection has published many negative findings including that a third of residents feel suicidal.

Following Freedom from Torture’s petition with more than 45,000 signatories, and the #CloseTheBarracks day of action on Friday 19th March led by Asylum Matters, Refugee Action, Freedom from Torture, Detention Action and Choose Love and supported by Restore, we are delighted by the Home Office decision to close the Penally Barracks. 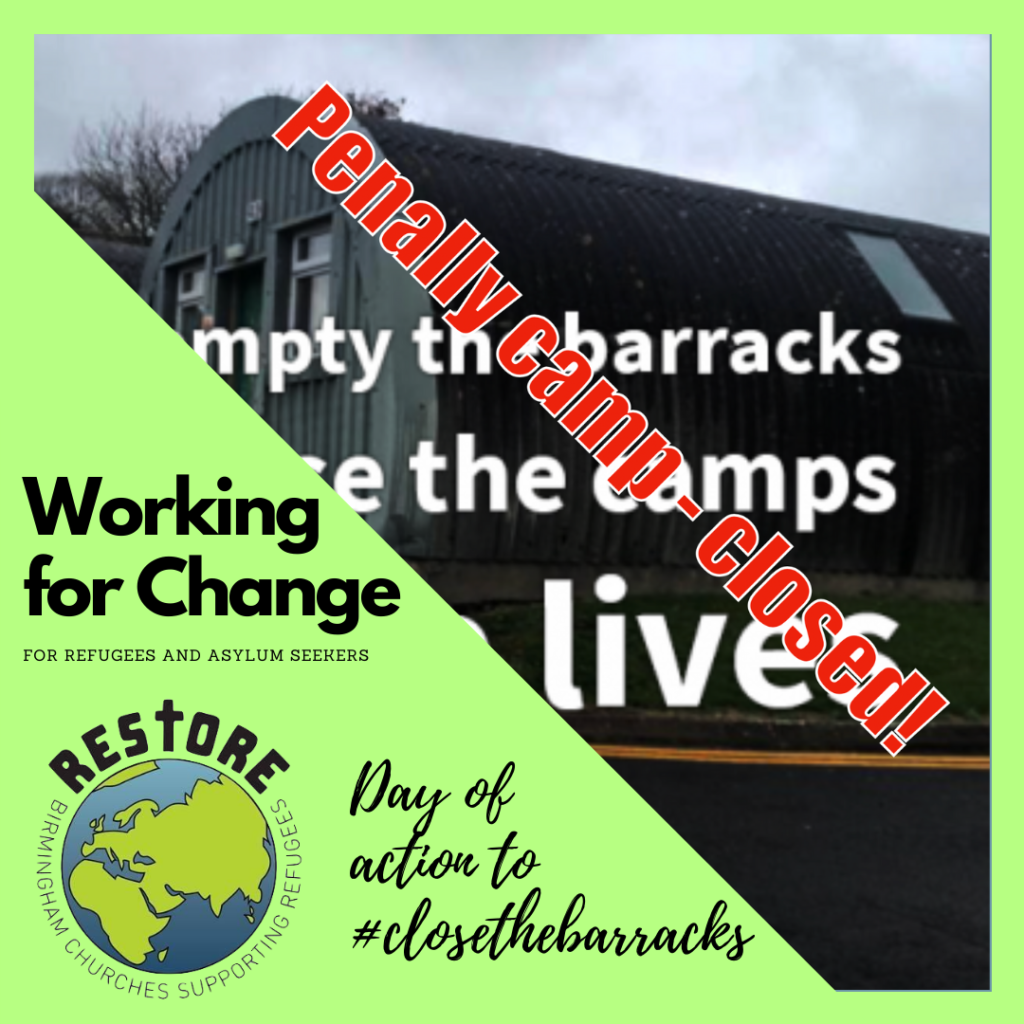 A huge thank you to everyone who took part by signing the petition, contacting and meeting their MP or joining the online rally on Friday 19 March. Just before the day of action the Home Office announced it would close the Penally Camp in Wales on 21 March – which many believe was due to the pressure they were under from this campaign.  However, the Napier Camp is still open, so there is further campaigning to be done.

The online rally heard direct testimony from people who had lived in the barracks – in earshot of firing ranges, surrounded by fences, with mould on the walls and feeling like criminals when all they had done was exercise their right to claim asylum.  This accommodation in military settings is contrary to Home Office’s usual policy to house people in the community for the duration of their asylum claim.  We hope that the Napier Camp in Kent will be closed soon and those living there can live in the wider community.

Jeremy Thompson, Restore Manager, was invited by UCB (United Christian Broadcasters) Radio News to talk about why Restore was supporting the campaign. To  listen to that interview, please click here.

You may have heard the recent announcements from the Home Secretary for an overhaul of the asylum system. Whilst we welcome the move to give those on refugee resettlement schemes indefinite leave to remain on arrival rather than refugee status for 5 years, there are other measures that sound very concerning. As the UK is a signatory on the UN Convention on Refugees in 1951, we must ensure that Home Office decisions on asylum applications are focused on each applicant’s claim of a well-founded fear of persecution and their need for sanctuary as a refugee and not on how they travelled to the UK.  So, there will be further campaigning ahead of us.

Another responsive site by Morse-Brown Design